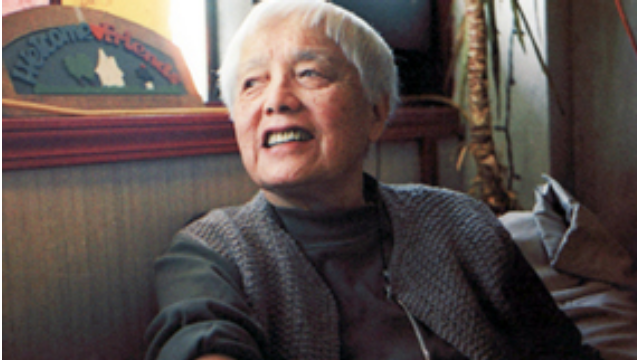 Grace Lee Boggs, 98, is a Chinese American philosopher, writer and activist in Detroit with a thick FBI file and a surprising vision of what an American revolution can be. Rooted in 75 years of the labor, civil rights and Black Power movements, she continually challenges a new generation to throw off old assumptions, think creatively and redefine revolution for our times.

Right at the start of American Revolutionary, director Grace Lee makes clear that she isn’t related to Grace Lee Boggs. She met the older woman through her earlier documentary, The Grace Lee Project, about the shared name of many Asian American women and the stereotypes associated with it. Philosopher, activist and author Grace Lee Boggs, then in her vigorous 80s and very much a part of Detroit’s social fabric, began applying a spirited analysis to the film project itself. She habitually turned the tables on the filmmaker with a grandmotherly smile that belied her firm resolve, probing the younger woman’s ideas and suggesting she consider things more deeply. Thus began a series of conversations over the next decade and beyond.

Director Grace Lee always knew she’d make a film about the woman with a radical Marxist past, intimidating intellectual achievements and enduring engagement in the issues—a sprightly activist who can gaze at a crumbling relic of a once-thriving auto plant and say, “I feel so sorry for people who are not living in Detroit.”

In some ways, the radicalization of Grace Lee Boggs typifies an experience many people shared during America’s turbulent 20th century. Yet she cut an extraordinary path through decades of struggle. As Angela Davis, an icon of the 1960s Black Power movement, puts it, “Grace has made more contributions to the black struggle than most black people have.” Actor Danny Glover and numerous Detroit comrades, plus archival footage featuring Bill Moyers, Ossie Davis, Ruby Dee and Boggs’ late husband and fellow radical, James Boggs, all testify to Boggs’ highly unusual position.

How a smart, determined, idealistic Chinese American woman became a civil rights movement fixture from its earliest post-war days and, later, a spokesperson for Black Power (often the only non-black—and only woman—in a roomful of unapologetic activists planning for a revolution they believed inevitable) is a riveting and revealing tale.

American Revolutionary shows that Boggs got in on the action—and the action got going—long before the turbulent 1960s. As she reminds a group of students, “I got my Ph.D. in 1940. Just imagine that.” Born in 1915 in Providence, R.I. to Chinese immigrants who moved to New York and prospered in the restaurant trade—Chin Lee’s opened in Manhattan in 1924—she grew up relatively privileged and excelled at the nearly all-white Bryn Mawr and Barnard Colleges.

Then two things happened. First, she read the works of German philosopher Hegel, the founder of “dialectical thinking” whose work influenced Marxism, which steered her into philosophy and a more critical stance toward society. Then, after finishing school with doctorate in hand, she found herself blocked by “We don’t hire Orientals” signs. So she took a train to Chicago, where she found a job at the University of Chicago’s philosophy library and an apartment on the South Side and began organizing her new neighborhood against rat-infested housing.

The rest is a people’s history of the American left. American Revolutionary deftly follows Boggs’ path from her first community campaign—as a tenants’ rights organizer—through the 1941 March on Washington movement, which demanded jobs for African Americans in defense plants; her mentorship under the West Indian Marxist writer and theorist C.L.R. James; her move to Detroit; her 1953 marriage to Alabama-born James Boggs (auto worker and author of The American Revolution: Pages From a Negro Worker’s Notebook); her split with orthodox Marxism in favor of Black revolution; her preference for the ideas of Malcolm X over those of Martin Luther King, Jr.; and her emergence as a spokesperson for Black Power.

Along the way, she studied, wrote influential books, engaged in protest and, together with her husband (who died in 1993), discovered increasing tolerance for what they saw as revolutionary violence in the face of violent repression. Then Detroit exploded in the 1967 riots, which, as American Revolutionary reveals, were watershed events for Boggs. Indeed, she instructed PBS’s Bill Moyers to call them “a rebellion.” After a short period of community solidarity, disorder and lawlessness took over the streets. Rebellion did not become revolution. Boggs and her husband began to reexamine their ideas in the light of experience. Though there are many who would argue with her, and she’d be ready for the argument, Boggs has maintained her dedication to humanist and even radical ideals, while tempering her understanding of revolution as an evolutionary process.

Grace Lee Boggs can feel hopeful about Detroit not despite the city’s unstable financial and social condition but because of it. She retains the radical’s abiding faith that a new way of living can dawn. “We are in a time of great hope and great danger,” she tells Democracy Now! host Amy Goodman. Yet, as American Revolutionary chronicles, this faith has also been tempered by mistakes, lost battles, unintended consequences, age itself and the sheer evolutionary force of social change. “It’s hard when you’re young to understand how reality is constantly changing because it hasn’t changed that much during your lifetime,” says Boggs. Still, channeling Hegel, she challenges people to “not get stuck in old ideas. Keep recognizing that reality is changing and that your ideas have to change.”

Boggs’ approach is radical in its simplicity and clarity: Revolution is not an act of aggression or merely a protest. Revolution, Boggs says, “is about something deeper within the human experience—the ability to transform oneself and transform the world.”

“From the moment I met Grace Lee Boggs in 2000, I knew I would have to make a longer film just about her,” says director Grace Lee. “Over the years, I would return to Detroit, hang out and watch her hold everyone from journalists to renowned activists to high school students in her thrall. I recognized myself in all of them—eager to connect with someone who seemed to embody history itself.

“This is not an issue film, nor is it about a celebrity or an urgent injustice that ralliesyou to take action,” she continues. “It’s about an elderly woman who spends most of her days sitting in her living room thinking and hatching ideas about the next American revolution. But if you catch wind of some of those ideas, they just might change the world.” 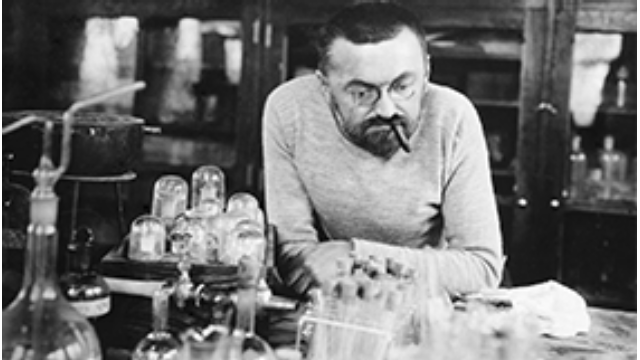 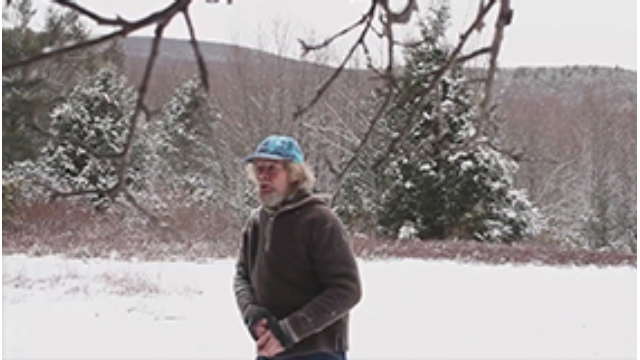