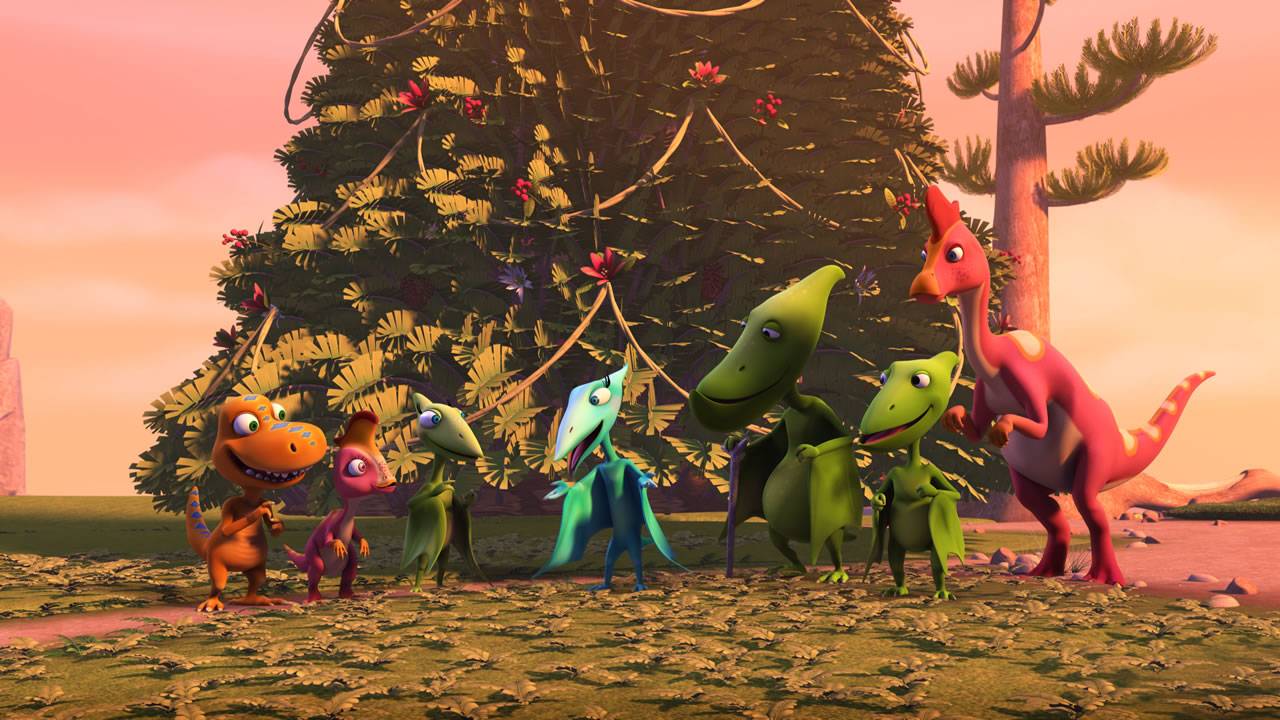 Part 1 - When Mr. Pteranodon and Larry go out to the Big Pond to find some redplatanoids for the Winter Solstice Celebration, they accidentally miss the last train home. Will Larry and Mr. Pteranodon stop bickering long enough to figure out a way home, or will they get stranded in the middle of nowhere and miss the family Winter Solstice Celebration?

“What’s At the Center of the Earth? Layers & Fossils!"

Part 1 - The Conductor takes the Pteranodon family on a very special journey on a new invention – the Drill Engine Train – in search of the perfect spot for a new Underground Dinosaur Train Station! Don is THRILLED to be venturing into the BIGGEST HOLE THE EARTH HAS EVER KNOWN! Shiny is nervous to be underground, until they meet a new friend (a Mesozoic Mole named NATASHA NECROLESTES), who teaches them all about the different layers of the Earth.

Part 2 - As the Pteranodon Family continues their journey underground, Don accidentally breaks Buddy’s trilobite fossil (the oldest fossil in his collection!) When the search for another trilobite fossil turns up empty, their new friend Natasha Necrolestes takes them to Fossil Alley, where the kids learn that the older the fossil, the deeper underground it is.

“What’s At the Center of the Earth? Troglobites & Minerals”

Part 1 - The Drill Engine Train burrows into an underground limestone cave, where the Pteranodon Family meets some strange creatures without eyes called “troglobites.” In a contest to see who would make the best troglobite, Buddy, Tiny, Shiny, and Don participate in a treasure hunt – with their eyes closed! The kids have to rely on their other senses (with some guidance from the actual troglobites) to navigate the cave and find the prize.

Part 2 - While digging even further underground, the drill bit on the Drill Engine Train breaks. The Pterandon Family find themselves in the Cave of Giant Crystals, where they learn all about rocks and crystals (what they are, how they’re different, how they form). In order to get back home, the Pteranodon Family has to fix the drill bit by finding a mineral harder than the mineral that broke the bit in the first place.

Part 1 - The kids are all excited! Why? Because they’re off to Junior Conductor’s Academy in Laramidia, to try to become Junior Conductors First Class. Buddy has a feeling he’s going to be a star in class, until he meets Dennis Deinocheirus – a kid who knows even more dinosaur facts than he does! Can Buddy get over his disappointment that he’s not the smartest kid in class, and make friends with Dennis (who seems like he’s having trouble making friends on his own)?

Part 2 - Now that Buddy and Dennis are friends, they have to work together (with the other kids) in order to pass a series of tests. If they succeed, they’ll receive their Junior Conductors First Class pins! But standing in the way of their success is the most challenging instructor of all… Thurston Troodon!

“Nest Swap”/“The Herd is the Word”

Tank Triceratops is really excited to show Buddy, Tiny, Shiny, and Don his favorite picnic spot, but when they arrive, the spot is overrun with a whole herd of Triceratops. Tank and the kids try to find another place with a little more privacy (and a lot less Triceratopses), but no matter where they go, the herd follows them. Will Tank be able to find a quiet spot without the herd, or does the herd have a good reason for following Tank around?

“Stop and Smell the Flowers”/“Moms’ Campout”

Mom takes Tiny, Buddy, and Don on a super secret daytrip to Qianzhousaurus Pond, where they meet Quentin Qianzhousaurus – a Tyrannosaur with similar features to Buddy, except for one major thing – Quentin has a long, thin snout covered in tiny horns! The kids think that Quentin’s long snout gives him a super smelling sense, but after a series of tests, they realize that he and Buddy have the same sniffing power. Can Quentin and Buddy’s super sniffers solve the mystery of Mom’s secret daytrip?

Mrs. Pteranodon organizes a “Mom’s Campout” with other moms and kids in the neighborhood. While on the way to the campout, Mr. Conductor challenges the kids to make a real “nature connection” by creating games that push them to look at nature from a different point of view.

“Where Have All the Lizards Gone?”/“Conductor’s Sleepover”

The Conductor takes the Pteranodon Family for a special trip to Lizard Island, where they discover that it’s been overrun by plants and bugs, and there are few precious lizards left. The Conductor concludes that the Changyuraptor Family (that he dropped off there awhile ago, and has since multiplied) has been eating all the lizards and throwing the entire ecosystem out of balance. Can the Pteranodon Family and Mr. Conductor convince the Changyuraptor Family to leave their home in order to get the island ecosystem back in balance?

With a hurricane looming, the Pteranodon Family convinces the Conductor to leave his train for the night and come with them to the safety of their hurricane shelter (a large, underground cave). But the Conductor has a hard time getting comfortable away from his train. Can the family and the Conductor pull together and help a family of beached Ichthyosaurs back into the ocean after the hurricane leaves them beached on the shore?

“Rollin’ on the Riverboat"

Part 2 - While still rolling down the river on the Dinosaur Train Riverboat, Grandpa Pteranodon tells Buddy about the Legend of Admiral Globidens – a HUGE Mososaur that supposedly lives on the river, but no one has ever seen. Buddy enlists Dad and Tiny’s help to look for Admiral Globidens, but they can’t seem to find him. Does Admiral Globidens really exist, or is he just a figment of someone’s imagination?

Part 1 - When Crystal and the King go for a trip to the Big Pond, they learn that it’s being recklessly overfished! They enlist the help of the Pteranodon Family to try to spread the word that if the dinosaurs and pterosaurs aren’t more careful, the Big Pond will run out of fish to eat. But when Crystal realizes that nothing they’re doing is actually raising awareness of the issue, she decides to organize a HUGE benefit concert, and everyone agrees to pitch in and help (as long as the King doesn’t have to perform)!

Part 2 - The “Don’t Overfish the Big Pond” Benefit Concert is underway, and it’s a HUGE success! But because there’s so much to organize, Crystal never finds the time to rehearse her big finale – so when it’s time for her to go onstage, she experiences something she’s never experienced before – stage fright! Can the kids help Crystal get over her stage fright and get her back onstage, or will the King have to come out of “performance retirement” to help her out? 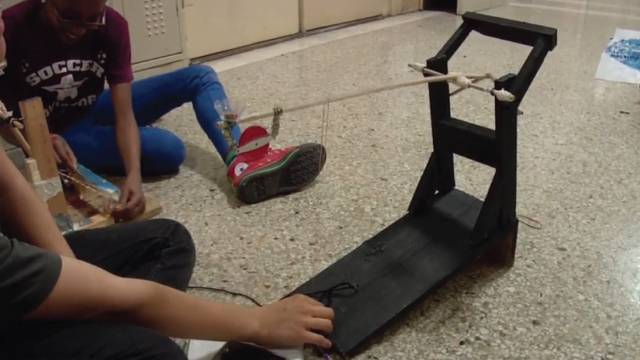 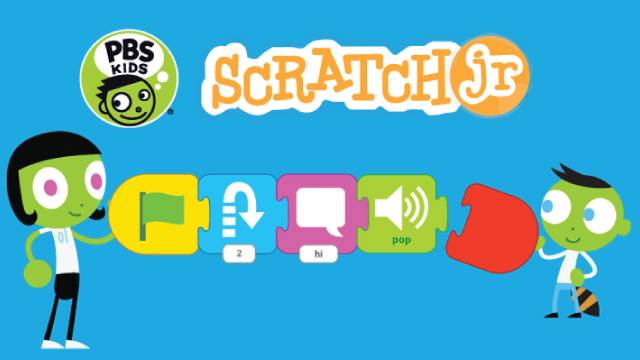